Blessing Others Through Meal Ministries

When I was recovering from surgery, and also during the weeks of my harder chemo treatments, one way that true Christian love and hospitality was shown to me and my family was through meal ministries.

What is a meal ministry? It is the act of serving others through the provision of a meal (or several meals).

Who can have a meal ministry? The list is endless. It can be done through a church, a Bible study group, a women’s ministry, a homeschool group, a small group of friends, as a family, or individually.

Who should the recipients be? Anyone you want to bless and let know you are thinking of them; but, especially remember those who are sick, injured, undergoing cancer treatments, or dealing with a drastic life change (a funeral, a new addition to the family, etc.)

What do you provide? Its hard to remember everything that was brought over to me and my family, and I regret not writing it all down and not taking any pictures, but I will try to recall what I can:

Is there anything specific that should or shouldn’t be done with a meal ministry? A great site to go to for ideas is TAKE THEM A MEAL BLOG. It is full of great advice on what to do for a meal ministry. Some things this website includes are a free meal scheduler, a list of RECIPES to choose from, 7 STEPS TO TAKING A MEAL, and HOW TO BLESS THEM BEST.

On another note, several thoughtful folks chose not to prepare an evening meal for us, but decided to bless us with a sweet treat or something for breakfast instead - things like cinnamon rolls, banana bread, a coffee cake, or baggies with frozen smoothie ingredients in them. These were very helpful in getting me to eat something for breakfast or snacks when I just didn’t feel like preparing something myself. So, if you don’t feel comfortable preparing a complete meal for someone, think about blessing them with a quick bread or some muffins. These can be placed in the freezer and easily pulled out when needed.

There are others who may not live nearby, but still want to help a family out in some way. Gift cards to local restaurants, or even the local grocery story deli, are big helps in this case. I am so thankful for the gift cards we received to places like Subway and Casey’s Pizza.

No matter what you decide to give, when food is involved, I suggest the following, based on our own recent experiences: 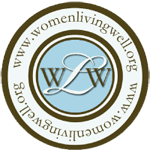 Email ThisBlogThis!Share to TwitterShare to FacebookShare to Pinterest
Labels My Cancer Journey, Ways to Encourage 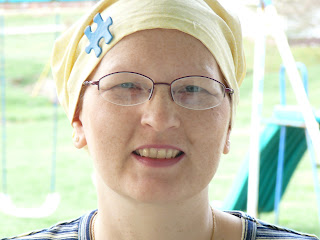 I guess this new chemo med is working, since I lost my eyebrows and most of my eyelashes in the shower this morning. As I washed my face, I noticed my eyebrows were hurting a bit. I gently pulled on them and the little hairs began coming out. At the end of the shower, I had only a few strands left, and they looked a bit out of place, so I finished the job with my trusty little tweezers. Now, my forehead and eyelids are "naked." Ha! Ha! Ha! I'm not upset about it. The hair will come back eventually. Until it does, I'll just be a bit cooler during the warmer months.

I had another chemo treatment this afternoon and slept through most of it. I'm still lagging a bit as I type this, but doing fine otherwise.

On another topic.... notice the puzzle piece I'm wearing on my scarf! April is Autism Awareness Month, and I'm showing my support. At least 2 people at the clinic have commented on it, and I was able to educate them a bit about what its for. That's the whole idea. So, if you have a pin, keep wearing it throughout the month of April!

Cancer Journey Part 15: The Start of a Different Chemo Med

I had to hold onto that verse - that promise from God - as I received my newest chemo treatment this past Tuesday. At the doctor’s appointment prior to treatment, the Oncologist informed us that the majority of people have no problem with TAXOL, which is the new chemo med I was about to receive. However, there are a small few who have had a severe allergic reaction to it. There was no way to know if I would react or not, so I was pre-treated with Benadryl and a couple of other meds. Then, the nurse sat with me while the first dose was slowly administered. She took my blood pressure several times, watched me closely, and kept asking me if I felt ok. Thankfully, no reaction occurred, and I breathed a sigh of relief. After that, I ended up sleeping through most of the treatment, due to the Benadryl they had given.

This different chemo med has been treating me well so far, just as the doctor predicted. I have had a few mild side effects, but nothing that really compares to those first four harder treatments I had. I will still have days when I am fatigued, but it will not be near as bad as before. So, we shall see how things go. From here on out, I will have a treatment once per week until finished. One dose of the Taxol is done, and I have 11 more weeks to go.

I am thankful to have a heavenly Father who is always there watching over me, just as it says in this poem from one of the cards I received (Thankyou, Janice!):


There’s a wonderful peace in knowing
That our Lord is always there,
Watching over us with boundless love,
Keeping us in His care.