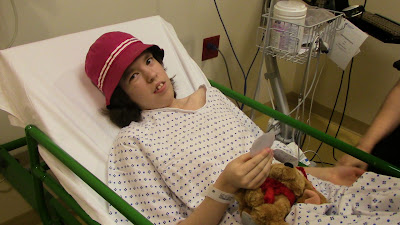 In March 2013, our autistic daughter, EL (age 14 at the time), began having visible seizures. After a visit with her Pediatrician, the doctor recommended we see a Neurologist, who then scheduled her for a sleep-deprived EEG. It showed epileptiform discharges, so EL was diagnosed with a seizure disorder and began taking medication.

She was also scheduled for a sedated MRI to see if they could find a cause for the seizures. Two masses were found on the MRI - one in the Pituitary Gland, and one in the Pineal Gland. The mass in her pineal gland is said to be a fluid-filled cyst, and has possibly been there for a good length of time. The one in her pituitary is a non-active tumor, and no treatment is necessary at this time; however, the doctors are keeping a close eye on it. Neither mass is the cause of her epileptic seizures. There is still no known cause for those, but they are currently being controlled with medication. You can read the progression of tests and results in the following blog posts.