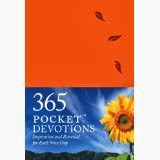 The Introduction to 365 Pocket Devotions says:


"When you spend time with God, something incredible happens. As you take a few moments to pause from the stress and hurry of everyday life to focus on God and His plan for you, you become more centered, refreshed, and at peace. Meeting with God every day transforms you. And as you grow closer to Him, you'll have access to His guidance and wisdom for all the daily decisions you face. That's what the inspirational readings in this book are all about:  renewing your soul so you can better understand yourself, your world, and your God."

The book has one devotional for every day of the year. Each devotional contains a Bible verse and a reflection on a specific topic such as peace, forgiveness, delighting in God, trusting God, joy, wisdom, trials, and blessings. It is a small, pocket or purse-sized book with a soft, flexible cover that makes it easy to carry with you wherever you go. It also has an attached ribbon bookmark to help you keep your place.

When time is short, this is a good little devotional book to help you remain connected to the Father as you read one of the devotionals, reflect upon it, and take a few moments for prayer.

NOTE:  Tyndale House Publishers has provided me with a complimentary copy of this book for review purposes. I have shared my own opinion.

A Possible Tumor for EL

The last update on EL's Health issues was posted ONE MONTH AGO, when I shared the results of her 2nd MRI. Finally, on Tuesday and Wednesday of this week, we were able to consult with three different specialists regarding the spots in her pituitary and pineal glands.
﻿

THE NEUROSURGEON:  This was the first appointment on Tuesday. After examination and discussion, the doctor does not believe the two spots are related. The one in the pineal looks to be a a simple fluid-filled cyst. The one in the pituitary is a bit more complex. He said there is a good possibility that EL will need a biopsy done at some point in the future. However, we need to wait for blood work results to determine just how urgent it is. A level of TUMOR MARKERS was drawn. So, we await the results of that, which can take at least a week to get back. (Elevated tumor markers can be an indication of a tumor that is cancerous, or for certain types of benign tumors.)

THE OPHTHALMOLOGIST: At this appointment (also on Tuesday), EL was put through a thorough eye exam, including having drops put into her eyes to dilate the pupils. The exam was done to see if the enlarged pituitary was affecting her vision at all, or if the enlarged pituitary was causing any sort of damage to the optic nerve. (The pituitary is abutting up against the undersurface of the optic nerve.) It wasn't a fun experience for EL, but was necessary. Thankfully, the exam revealed that she has 20/20 vision and her optic nerve is in good shape!

THE ENDOCRINOLOGIST:  This was the final appointment, and probably the most important one. At this visit, the doctor examined EL, and talked with us about her symptoms. Currently, the doctor cannot give us a definite answer as to what is causing EL's pituitary enlargement. He ordered blood to be drawn to check her hormone levels and, once these results come back (along with the Tumor Marker levels), we will know more.

CONCLUSION:  The word "tumor" is a scary word. However, the doctors explained that a tumor just means there is an abnormal growth. It can be benign, or it can be malignant. The current indication is that, IF this is a tumor, it is most likely benign. So, if all of the blood levels turn out to be normal, then we won't need to be seen again for 3 months. At that time, they will do another MRI to see if the spots have enlarged or stayed the same. If, however, the blood levels are abnormal, then we will discuss what the next plan of action will be.

As a parent with a medical issue, I have fought hard to get well for the sake of my family; but, even though going through treatments was a hard thing for me, it has been 10 times harder to watch my child going through numerous medical tests. Its one thing to suffer as an adult, but its entirely different to watch your child suffer, especially when she doesn't truly understand why she is being put through these tests.

Through it all,  we will hold tightly to the promise that the Lord is there to help us through this.

One Year Ago, I Began My Cancer Journey

One year ago on September 12th, I found a lump that changed my life forever. And, it was one year ago today (September 14th) that I had a mammogram to get a picture of that lump. Wow, how time flies. This past year has been an incredible journey - one that I never really thought I would be going through, at least not in my early forties. I did not enjoy this path I was put on, but I did find joy in the journey because I have chosen to allow God to work in and through me through it all. Back in 2002, my dad (Dr. James L. McIntosh) preached a sermon on this very thing. I took notes on the sermon without realizing just how relevant it would be to me some day. Here is  a quick summary of the message...


Luke 22:31-32 "Simon, Simon, behold, Satan has demanded [permission] to sift you like wheat; but I have prayed for you, that your faith may not fail; and you, when once you have turned again, strengthen your brothers."

Have you ever been "sifted," as in Luke 22:31? (To be sifted means to be put through a challenge). Every Christian goes through "stuff" in their lives. At times we handle it correctly and at times we "drop the ball." When God sifts us, it is a time of change that helps us to grown closer to Him. Therefore, as James 1:2 says, "Consider it all joy, my brethren, when you encounter various trials."

There are 3 men in the Bible we will focus on who were sifted. The desired result of their sifting was:

What types of things does God use to bring about the changes He deems best?

JOB -- He was an upright and blameless man (Job 1:1 & 8). He knew the difference between good and evil. He didn't try to combine the two, like many of us do in our lives. Instead, he turned from evil. In Job 1:5, he even interceded for his children. When Satan approached God (Job 1:6-12), God brought up the subject of Job. Satan said Job was so loyal because he was "coddled." He had everything he ever wanted. So, God gave Satan permission to test Job. During the sifting process, Job mourned but he still worshiped God (Job 1:20-22). Instead of saying, "Why me?" he fell on his face and worshiped in the trial.

PAUL -- 2 Corinthians 12:1-10, Paul had an encounter with God and was changed dramatically for the better. He became a very Godly man, walking close to the Lord and willing to be persecuted for Christ. He was used of the Lord in innumerable ways. However, he was still given a "thorn" in his flesh in order to keep him humble. We don't know what the "thorn" was. It could have been a physical problem, a spiritual problem, a battle with a sin such as lustful thoughts, or there's even speculation that it could have been the mere fact that Paul was being persecuted and mocked and he had a hard time dealing with it at times. It's not important for us to know what the "thorn" represented. All we know is that Paul asked God to take the thorn from him at three different times, and God said "no." So, Paul learned to accept the Lord's decision and to be content to suffer for Christ. The thorn shows that Paul was not perfect. He was human. But, despite his weaknesses, he was still highly used of God. We don't have to be perfect in order to be in ministry or be used by God. If that's what we are waiting for, then we will never serve the Lord the way He intended us to.

PETER -- Luke 22:21-32, 54-62, Satan was allowed to sift Peter (vs. 31). He wanted Peter to prove his loyalty to Christ and expected him to fail. In verse 32, Jesus did not tell Peter to wage a campaign against the enemy. Instead, He prayed for Peter. He prayed that Peter would pass the test and then be able to strengthen his brothers. Peter didn't think he would ever deny knowing Christ. But, 1 Corinthians 10:12 says, "let him who thinks he stands take heed lest he fall." Jesus knew that Peter would fail this test, but he allowed Peter to go through it because He knew it would strengthen him in the long run and he could be an encouragement to others.

In Luke 22:62, Peter understood what had happened and how he had failed. Peter is now broken and sifted, and usable for the Lord. There are times that we need to be broken so we are less likely to fall. Peter repented of his sin as he realized he can not do things under his own strength.

Through MY CANCER JOURNEY, I also have been "sifted."
The journey is not over, and God is not finished with me yet. But, as I continue, I feel more confident in knowing that God causes ALL things to work together for good, to those who love HIM.

Last week, after realizing our kids have outgrown their swingset, we gave it away to another family to enjoy.  There is a time to keep, and a time to give away. This old swingset served its purpose in our lives, so it was finally time to say goodbye.

Now, I'm feeling a bit nostalgic as I look back on old pictures of our kids on their swingset. I remember we bought it for $25.00 at a garage sale in October 2000 (13 years ago). Our daughter was 2 years old. She loved to swing, just as most kids do. Then, the years went by and our son took his turn as well.

As I think about it, I don't really care much about the swingset. It was getting old, needed some work done to it, and was kind of just in the way most of the time. What I do care about is the TIME we have spent watching our kids play, learn and grow. Oh, the sweet memories...