Be Careful What You Pray For

What an interesting week we’ve had! (Life is never really boring around here anyway, LOL!) It all started because of a prayer request I mentioned at the last prayer meeting with our local homeschool group. I first asked for prayer that the kids (especially our youngest) would adjust quickly to a new school routine. Aside from that, I also told the group how I wanted to spend less time on the computer. During the summer months, I became used to sitting at the computer on a daily basis as I finished up my book about Communion and began the advertising process. It has been hard for me to break away from the computer at times. My housework, and other things, had been neglected. So, I asked that my time would be used more wisely. I don’t want to completely give up my computer time, but I DO need to start having a specific time set aside each day to be on.

Lo and behold, shortly after that prayer meeting, I found out our cats were loaded with fleas! Aaaggg! I ended up spending most of the week bathing the cats, giving them a flea treatment from the Vet’s office, and thoroughly vacuuming and cleaning the entire house. I also set up an appointment for an exterminator to come out and spray the house. We had to vacuum again thoroughly before he came, and move items away from the walls and off the floors as much as possible. Then, we all (including the cats) had to be out of the house for at least 4 hours while the treatment dried. (Thank you to my friend, Rachel, for allowing us to crash her place for a few hours!) When we got back home, the floors needed to be vacuumed once again before we could let the cats out and move furniture back into place. Ugh! What an exhausting week! Has anyone ever told you to be careful what you pray for? Well, this is a classic example of that! LOL.

Oh well.... I’m so thankful we found the fleas before all their eggs hatched and we had thousands of little hopping, biting black bugs all over us. God is good.... ALL the time. 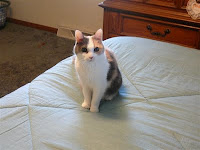 Poor kitties.... No more going outside for recess.... 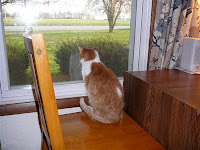 Email ThisBlogThis!Share to TwitterShare to FacebookShare to Pinterest
Labels Cats, My Misc. Thoughts