A Possible Sleep Disorder for EL

EIGHT MONTHS AGO, our daughter was diagnosed with seizures and began taking medication to control them. As far as we know, she has not had any more visible seizures (unless she has had some at night that we haven't seen). However, for the past 6 months (or there-about), we have noticed some differences in EL's behaviors:  signs of depression, easily irritated, outbursts of anger, difficulty comprehending, and a decrease in cognitive function. After Christmas, I called her Neurologist to discuss whether or not the seizure meds were the cause of these changes. She said it is very possible. However, she also wanted to rule out a sleep disorder, since we had previously discussed EL's seeming lack of sleep. We were referred to the sleep clinic and an appointment was set for March 12th (which was this past Wednesday). 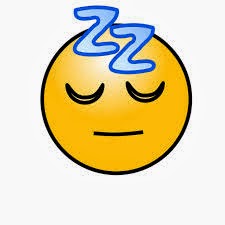 Our consultation with the Nurse Practitioner at the sleep clinic went well. They asked us a lot of questions and determined EL should be evaluated for a sleep disorder. The NP suspects either Restless Legs Syndrome or Sleep Apnea. Based on the behavior changes, and family history, I am thinking more along the lines of Sleep Apnea, but we will see. We are waiting to be scheduled for an overnight stay at the clinic, most likely sometime in April. I will be staying with her in the room. They will hook her up to all sorts of machines and watch her breathing, movement, sleep cycles, etc. They will also do an overnight EEG to determine if she is having seizures in her sleep. This is something we have been wanting done for several years, so its good we are finally getting it done. In the meantime, we are increasing EL's iron intake, and will also be giving Melatonin - two things recommended by the NP.

I am thankful for good doctors and for the medical technology that provides us with needed answers; but, if I were to say I'm not tired of seeing all these specialists, I would be lying. I know EL is tired  as well. Over the past 9 months, she has seen her Pediatrician, a Neurologist, an Endocrinologist, a Neuro-surgeon, an Ophthalmologist, a Neuro-Oncologist, and now the sleep clinic. She has also had bloodwork drawn several times, has had a sleep deprived EEG, and had 3 MRI's. It has not been easy on any of us. BUT...  the difficulties we face in this life are only helping to draw us closer to our Lord.