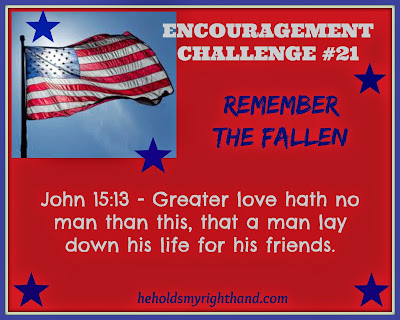 Tomorrow is Memorial Day in the United States of America.

Do you know what this holiday is about? Do you know it's not just a day off work and a day to have cook-outs with friends and family? Of course, having cook-outs and family gatherings is not wrong to do, but the main purpose of the day is for us to set aside a small amount of time for solemn remembrance of our fallen soldiers.

Memorial Day, originally called Decoration Day (due to the graves of fallen soldiers being decorated), was meant to honor the soldiers who had died during the American Civil War. Then, after World War I, the holiday changed to recognize ANY soldier who had died while fighting during ANY war.

So, what can we do? There's nothing we can do to bring back those who have perished but, in order to show our patriotism, we can still decorate their graves out of respect, we can fly an American flag in their honor, and we can take a few moments out of our day to stop and remember the sacrifice these soldiers made for our country.


ENCOURAGEMENT CHALLENGE #21
The “National Moment of Remembrance” resolution was passed in the year 2000. It asks that at 3:00 p.m. local time on each Memorial Day, all Americans pause for at least one minute to observe in their own way a moment of remembrance and respect. One way this can be done is to listen to a version of Taps.

I encourage you, at 3:00 p.m. tomorrow, to stop and say a prayer for those who have lost loved ones in battle, for the safety of soldiers who are currently serving, and for the future of our country. Then, also take a moment to listen to one of these versions of Taps and reflect on what Memorial Day really means:

Email ThisBlogThis!Share to TwitterShare to FacebookShare to Pinterest
Labels Patriotic, Ways to Encourage