An Evening with Casting Crowns 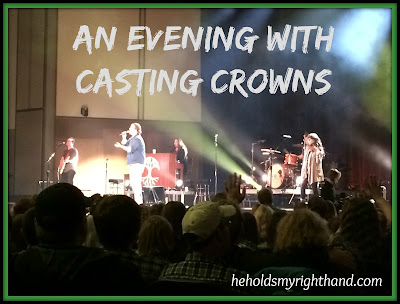 :  a list of things that one has not done before but wants to do before dying

Last weekend, my husband and I accomplished one of our "bucket list" items (at least it was on my list, but I know he was thrilled to be able to go, too). We went to a Casting Crowns concert, and it was amazing! Casting Crowns is my favorite musical group, and I had never seen them in person before this. When I found out they were going to be playing at Olivet Nazarene University, not too far from family, we jumped at the chance. (An early birthday present for me - Yay!)


It wasn't a specific album tour, but was sponsored by Shine FM and was labeled as "An Evening with Casting Crowns." The group sang a mix of songs from ALL of their albums, and the opening song was Lifesong (from the album Lifesong). Here's a short clip of it:


When they came out on stage, I was so excited to be able to see and hear them up close - the people who have musically touched my life in so many ways. I was overwhelmed with emotions.

After Lifesong, they launched into several songs from the Thrive album. Mark Hall (the lead singer/songwriter), spoke about a huge tree he visited with the youth from his church and how the roots of the tree were just as long and deep as the far-reaching branches. He used this illustration to share how we need to be rooted in God, like a tree firmly planted by the water.


Jeremiah 17:8 - They will be like a tree planted by the water that sends out its roots by the stream. It does not fear when heat comes; its leaves are always green. It has no worries in a year of drought and never fails to bear fruit.


Another song from the Thrive album was "Just Be Held." We didn't get a clip of that one, but I am mentioning it because it really touched me. Mark sang this song after talking about his journey with cancer. He wrote the song a couple of years before he was diagnosed, but said God knew what He was doing by giving him that song ahead of time. Praise the Lord, Mark kicked cancer in the butt, and so did I.


There were way too many songs sung to list them all. Some of them were shortened, due to time constraints, and I didn't like that part; but, they sang plenty of full-length songs also, many of my favorites. One of David's favorites was the updated hymn At Calvary from their Live Worship album.

We also got a clip of the well-known song, Praise You in This Storm. In this clip, you can see the worship that was taking place during this song - not worship of the band, but worship of our Heavenly Father, the God who made Heaven and Earth.

I don't remember what the final song of the night was but, after the final song, there was a lot of clapping and carrying on by the crowd until the group came back out for an encore and did two more songs. I think (my memory is getting bad) the final encore song was Glorious Day (Living He Loved Me), from the album Until the Whole World Hears. It was the perfect song to end with because we were reminded that "one day the trumpet will sound for His coming, one day the skies with His glory will shine." One day, the Lord will be coming back to take us home and, oh, what a glorious day that will be.


I wish we had gotten a clip of how they ended the concert and left the stage for good. We were nearing the end of the final song when they all exited the stage, leaving the audience to finish singing the song out on our own - no one on the stage, no music, no lights - just the audience singing and worshiping together a cappella. Then, the lights came on and we were done. Awesome.

I did have just one major disappointment about this concert... I wished it could have lasted longer... 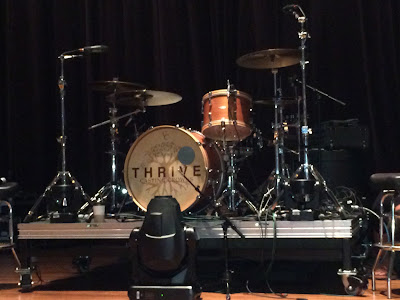