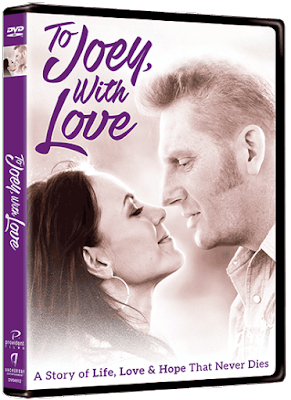 Earlier this year, I was one of the thousands who was following Joey and Rory Feek's story on RORY'S BLOG. I didn't know anything about them until a friend of mine introduced me to them on Facebook. I found out that Rory is a singer/songwriter who began blogging in 2014 about his life with his wife, Joey, who was also a singer. At the time he started blogging and filming the big and little moments in his family's life, he didn't realize the impact it would have on so many people, including mine. God gave them a story to tell to the world, and that is exactly what they did.

TO JOEY, WITH LOVE is the true story of Joey and Rory Feek's journey as they welcomed their special needs daughter into the world, and then continued to share their faith during Joey's hard-fought battle with cancer. Their journey is about "life, love, and hope that never dies." It is a sad story, as Joey went home to be with the Lord in March of this year, but it is also a story of hope, as both Joey and Rory put their faith and trust in something far greater than themselves.

This documentary/film will be available on DVD on December 20th. You can pick up a copy at VARIOUS LOCATIONS or you can try to win a copy here, as I will be giving away one of the DVD's. The giveaway will close on Saturday, December 3, 2016 at 8:00 p.m. CST. One entry per person, ages 13 and up. US residents only.


Thank you to Icon Media Group for providing me a free screening of this movie, as well as the DVD for giveaway.