GUEST: Charity Vanderhoof - Sharing About Her Husband's Deliverance From Seizures 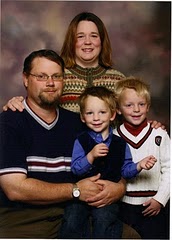 My friend, Charity, is the guest blogger for today. She is sharing how God sent some “angels” to help deliver her husband, Vic, from a severe seizure disorder. Thankyou for sharing this, Charity! It is wonderful to hear how God worked this situation out in your life!


~*~*~*~
On January 31, 2003, at 9:06pm, Vic and I had just gotten home from going out for pizza on a Friday night. Vic had his first grand mal seizure after a 23-year absence of them. We had only been in our apartment for 5 minutes. While Vic was driving home, just as we were getting off our exit, he complained about a ringing in his ears. Then after being home only a matter of minutes, Vic had the seizure. This was the first of many seizures and we learned the ringing of the ears came before seizures for Vic. He continued to have seizures for five years. It was like walking on eggshells. You never knew when the next seizure would come and you never knew what, if anything, would trigger one.

We lived through a lot during that time until, one day, by a set of circumstances I will not go over right now, we ended up with a different doctor. It turns out that my husband was a candidate for brain surgery. He had the surgery February 19, 2008, and Vic has been seizure free ever since. He also no longer takes medication. Furthermore, he had always had these unexplained “episodes.” It turns out those were undiagnosed petit mal seizures and Vic could not remember even one day of his life not having one of these episodes, prior to the surgery. These petit mal seizures are completely gone as well. To even further share the miracle of this, Vic had learning disabilities that reversed as he healed from surgery.

God sent a team of “angels” to us that absolutely revolutionized our lives when He led us to Dr. Kahlil, Dr. Roof, and Dr. Niemat. We had no quality of life, and had no hope of a quality of life. But, then, the Lord delivered us from our situation. This past December, Vanderbilt (where the surgery took place) used Vic as an example of a changed life from this type of surgery. At that time we figured up some of his statistics. On average, Vic had 3 violent grand mal seizures per week for a period of five years. He also had daily petit mal seizures since infancy. To God be all the Glory that Vic, and our entire family, has been delivered from these seizures.