Things went well on the day of the Lumpectomy. I didn’t know what to expect, as the only other surgery in my lifetime had been a tonsilectomy at the age of 9. So, I was a bit nervous on the outset; but, the staff was very good at explaining the process and putting me more at ease.

It all took a bit longer than expected, but still pretty smooth all-together. The hardest part for me was the first procedure I had to endure. Before the surgery, I had to go to Radiology and have my right breast compressed in a mammogram machine for about an hour while they inserted 2 guideline wires for the surgeon. The insertion of the wires themselves were not too bad because they numbed me for that. But, the compression part was extremely painful, and I was in tears. After a little while, I sort of adjusted to the pain. Then, the numbing for the wire insertion helped also. But, it was still a very uncomfortable procedure. I sure was glad when that was over!

For the surgery, I was completely "knocked out" and don't remember a thing after being rolled down the hall. I woke up to some pain of about 4-5 on the scale of 10, but nothing that the pain meds didn't help. They made an incision around the areola, then went up under the skin to cut out the cysts and the surrounding tissue that had the calcifications. I was very sore and swollen, but not in major pain. I was told to wear a compression bra for at least a week, and was not allowed to lift more than 10 lbs.

The WAITING began again as we then waited for more results and were told we would have them in a few days time (Remember, the day of the surgery was Tuesday, November 6th). However, the weekend came and went and we did not hear anything. We figured no news was good news, and was expecting they would wait to talk with us at the follow-up appointment on the 14th.

But.... while I was at an Avon party on the evening of the 13th, the surgeon himself called and talked to my husband about the results. He wanted to sort of give us a "heads up" about what we would be discussing at the appointment the next day, and the news was not encouraging. When I arrived home from the party, David took me to our room to reveal the lump had a little bit of everything in it: fibrous tissue, cysts, extensive DCIS (the non-invasive cancer cells), as well as some INVASIVE cancer. It was a definite shock, to say the least, as we were only expecting maybe some mild-moderate DCIS. The reason it took so long to get the results is because the doctor was shocked by them also and had them sent out a couple more times for testing, just to be sure of what it was.

The surgeon spent a good amount of time with us at the appointment the next day, explaining what we were looking at. The invasive cancer was about 2 cm in size, and it did not show up on mammograms, etc. That is why it was a surprise to him. He said (and here’s the Lord’s intervention I was talking about in PART 3 of this journey) he could have very easily missed the invasive cancer if he had done the needle biopsy, since he did not see it on the mammogram. The pathology report said the tumor was grade 3 out of 3 and was Estrogen Receptor Positive (ER+). He believed he got all of "the bad stuff" out, but that did not mean there wasn’t still cancer somewhere else in the body, including the lymph nodes. We also still had the DCIS interspersed throughout the tissue that he didn’t believe was all gone, due to the margins of the removed tissue not being clean and clear within a certain distance. 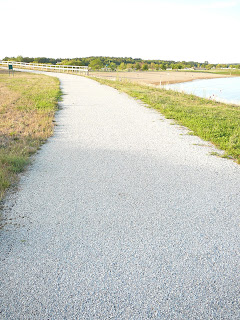 So... we were referred to an Oncologist - one who works closely with our surgeon and is also very good and thorough. We would find out what the next step was to be while seeing him on November 21st.

After this visit, we were shocked and somewhat in denial as we tried to process it all, but continued to trust in the Lord for guidance and strength. We knew He was still there holding our hands. We just weren't sure which direction he was taking us in yet.
Posted at 6:00 AM