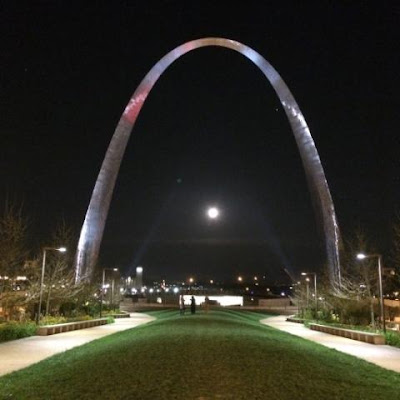 David was at a conference in St. Louis this past week. Even though this was a work-related conference, I know he enjoyed the chance to get away for awhile and to wind down from some of the pressures he has been under.

While he was there on Tuesday night, there was a full moon. The weather was nice, so he went out to the plaza of his hotel and was able to take this awesome shot of the full moon positioned directly in the middle of the Arch. I love this shot. It is a reminder of how God's majestic creations can be found anywhere in the world. It is also a beautiful combination of man's God-given creativity (the Arch) with God's perfect handiwork (the moon).

Psalm 19:1 - The heavens declare the glory of God, and the sky above proclaims his handiwork.

Email ThisBlogThis!Share to TwitterShare to FacebookShare to Pinterest
Labels Photo of the Week