Photo of the Week #17: Staying Focused 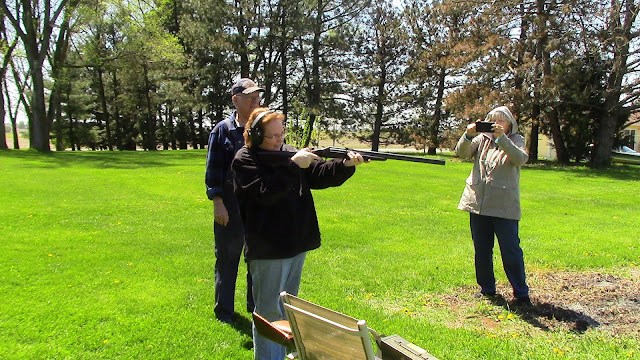 Last weekend, we visited David's family a few hours North of us. While we were there, Grandpa John and David gave JJ and me a lesson on shotgun shooting. It was fun. The above picture is me shooting a .410/.22 Over-Under Rifle/Shotgun. I was only shooting the shotgun part.

After that, we moved up to a 20 gauge double barrel shotgun, which had a little more of a "kick" to it. Here are a few short videos of us shooting that one...


Along the same topic as shooting and hitting targets, here is a hunting parable I found online about staying focused on the things that are above....

There was once a man who had nothing for his family to eat. He had an old shotgun and three bullets. So, he decided that he would go out hunting and kill something to eat for dinner.

However, at the same time he saw a deer, which was a better kill. He brought the gun down and aimed at the deer. But then he saw a rattle snake between his legs about to bite him, so he naturally brought the gun down further to shoot the rattlesnake. Still, the voice said again to him, "Pray, aim high and stay focused.'"

So, the man decided to follow the voice. He prayed, then aimed the gun up in the tree and shot the wild turkey. The bullet bounced off the turkey and killed the deer. The handle fell off the gun and hit the snake in the head and killed it. And when the gun had gone off, it knocked him into a pond of water.

When he got up to look around, he had fish in all his pockets, a dead deer and turkey to eat for his family. The snake (e.g. Satan) was dead simply because the man listened to God: Pray first, Aim High and Stay Focused.

Bottom-line: Pray first before you do anything important, aim and shoot high in your goals, and stay focused on God and you will come forth successful.

Email ThisBlogThis!Share to TwitterShare to FacebookShare to Pinterest
Labels Photo of the Week