January 16th is Full of Memories

Sounds like a clock, doesn’t it? Well, its not. It’s the sound I hear almost every night in bed, but its not my clock, or a watch. Actually, it might sound more like a “click.” Listen again....

It’s a sound I have become accustomed to hearing for the last 15 years of my marriage. Now that I think about it, its actually been quite comforting to me - oh - aside from the snoring part of it... I guess I forgot to mention that part...

Yep, its coming from my husband. The clicking part actually comes from an artificial heart valve opening and closing - it was installed in 1996, 15 years ago today! Wow, I can’t believe it’s been that long! The snoring part... well, that just came as a part of the package. But, anyway, January 16 is a significant day in our lives because it was the beginning of a new adventure and a new kind of health for David. 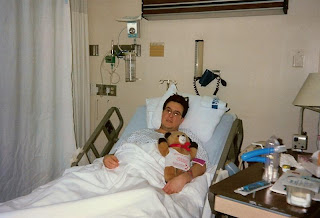 But, actually the 16th has more than one significant meaning to us. On that day, in1990, David and I met for the first time... 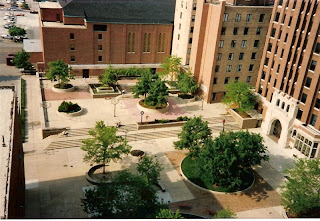 ~
The first day of Angelology class was about to begin. It was a popular class on the study of angels, mostly taken by upperclassmen. I was only a Sophomore, but I knew this would be my last semester at the Moody Bible Institute. So, with a strong desire to take this class before leaving school, I walked into the lower entrance of Alumni Auditorium and looked around for a place to sit. I didn’t want to sit too far in the back. Nor did I want a seat too close to the front. Spotting a few empty seats somewhere between the front and the mid-section, I walked up the stairs and sat a few chairs away from another young student. He looked at me and said, “Hi, my name’s Dave.” I replied in the same manner, revealing my name as “Vicky.” He seemed like a nice, young man. And, not too bad looking either. Curiously, I had never met, or even seen him before. In my three semesters at Moody, I thought I had at least passed by each student in the hallways. This one obviously got missed. A thought entered my mind and made me think this “Dave” would become someone special in my life. I had this feeling he was thinking the same thing about me. But, I brushed the thought aside and decided not to acknowledge it. I was getting over a “crush” I had on another young man, and was not interested in dating anyone. So, the next time class was in session, I chose to sit closer to a student from my brother floor. This was in hopes of warding off any advances from Dave. Little did I know, not only would Dave end up being a special friend, he would eventually become the husband I thought I’d never see. 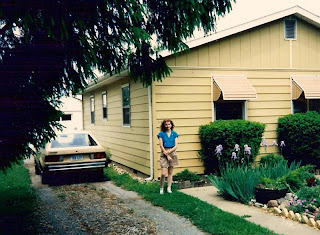 A year later, that SAME day in 1991, I bought my first car - a tan 1984 Ford Escort, a car that I used to drive back and forth to visit Dave while we were long-distance dating (You can see the back end of it in this picture).
And, as already mentioned, that same day in 1996, my husband of 3 years (at that time) underwent a major open heart surgery to repair an aortic aneurysm and replace a bad valve.

My goodness... such memories from January 16th....

I am thankful the Lord brought David and I together as friends - 21 years ago today.

I am thankful the Lord provided a way for David and I to continue seeing each other after we went separate ways from college - 20 years ago today.

I am thankful the Lord spared David’s life when he underwent a very complicated surgery - 15 years ago today... and it’s why I take comfort in hearing the constant click...click...click... every night by my side. To be honest, I don’t even mind the snoring...


Happy “anniversary” David, in more ways than one!
I'm so glad God brought you into my life!
Posted at 12:06 PM

Email ThisBlogThis!Share to TwitterShare to FacebookShare to Pinterest
Labels My Memories, My Misc. Thoughts