This past weekend, I guess I had what some would call the “Winter blues.” I was so bored with life and also a lack of sunshine. Basically, it stemmed from the fact that I had been cooped up in our house for the previous 2 weeks, due to bad weather and taking care of sick family (my son and my husband). So, I was bummed, to say the least; and every little thing that happened was one more reason to bring me down, including the way my hair had been acting lately. Every woman that I know goes through spurts where they are sick and tired of their hair and desire a change. So, what did I decide to do about it? Did I call up a beautician and make an appointment? Nope! Oh, instead, I decided I could do it myself. Ha ha ha

I have cut my children’s hair since they were babies, and I have trimmed my own hair many times as well, so I was looking forward to my hair being refreshed by a little trim. However, I must have taken my frustrations out with the scissors and ended up cutting off a LOT more than I had planned - not to mention, it was very uneven in the back. I was NOT happy, and was depressed and grumpy the rest of the day. Eventually, my husband’s shoulder became soaked as buckets of emotions were poured out on him. The tearful release was a big help... but it sure didn’t help the looks of my hair! I was actually embarrassed to leave the house. 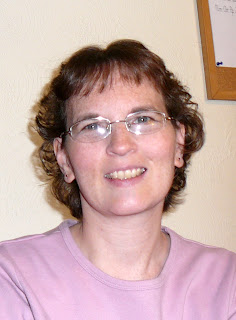 I finally connected with my friend, Gwen, and she graciously opened her salon for me that night to give me a more evened up haircut. I still hated the shortness of it, but at least it was in better shape than I had left it. One consolation was that hair does grow back! Then, after a good night’s sleep and a shower the next morning, I didn’t hate my hair as much as I did the night before; and, as time has gone by this week, the change has grown on me.
So, what’s the moral of this story? Well, I could use this example to show how one “little” wrong-doing can turn into bunches of wrongs, and can eventually wreak havoc on something you thought would be simple to get away with. That could work, right? But, no.... I think the best example this story has to offer is what NOT to do when you are cooped up in the house and bored to no end. At least I’ve learned MY lesson!
Posted at 12:02 PM

Email ThisBlogThis!Share to TwitterShare to FacebookShare to Pinterest
Labels Happenings